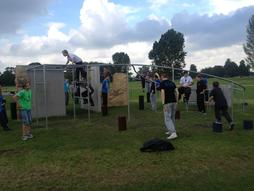 Local traceurs using the park
The Nantwich Freerunners Club was formed to drive forward the plan to establish a public freerunning park in Nantwich.

The initial vision was to build a purpose designed, outdoor parkour/freerunning park, which will provide a free and open access facility for practicing and learning the discipline in the Nantwich area and will be one of the best facilities in the UK.

The park has been financed purely through fund raising, donations from the public and charitable grants.  We hope you feel able to add your support to the project, which is lead by young people to create a facility for young people.

Following a successful bid for a grant from Community Spaces (a grant fund provided by The Big Lottery and administered by Groundwork UK) and a generous grant from Nantwich Town Council, work was begun on constructing The Nantwich Freerunning Park.  Below are a few photos of the arrival of some of the equipment, during construction.

Construction of phase one of the park was completed in June 2012 and it is now accessible to the public.  The official Grand Opening took place on Saturday 25th of August 2012.  A special guest of honour, Daniel Ilabaca, who is internationally recognised as one of the top freerunners in the world, officially opened the park.

There was an exhibition of the club's plans to develop access to parkour and freerunning in the area, as well as presentations from our partners in the local community.  Throughout the day there were demonstrations and coaching sessions and even a chance to see Danny in action!

The facility is the only one of its kind in the north west and places Nantwich at the leading edge of the promotion and development of the discipline in the region.  Watch this space for further updates as plans for the development of the facility and the provision of Parkour sessions unfold.